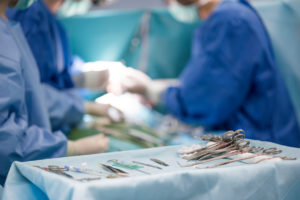 It is not unusual for accidents to occur when undergoing medical treatment. However, when an injury results from medical treatment that deviates from accepted standards of practice, a medical malpractice lawsuit may be the only way for the patient to recover damages. If you have suffered serious injury at the hands of negligent doctors, hospitals and other medical professionals, you may be entitled to considerable compensation for your pain and suffering, as well as future and past lost wages and medical bills. In cases of wanton and reckless conduct, punitive damages can also be attained for the victim.

Medical malpractice cases typically require a significant amount of research and careful presentation to be successfully litigated. This is because a favorable outcome requires proof that there was a failure to provide a level of care that is commensurate with accepted standards and that such failure was the cause of the injury.

The NYC medical malpractice lawyers at Friedman, Levy, Goldfarb & Green are available to handle virtually any type of case involving medical negligence, including those that result in major injuries or wrongful death.

What Is Medical Malpractice?

Medical malpractice can occur as a result of:

Misdiagnosis of a Cardiac Problem

Physicians that failed to detect an asymptomatic heart valve disease in a 49-year old man, notwithstanding his more than two months of pain and fevers, settled a medical malpractice case based on that misdiagnosis for $6 million.

A physician who failed to stop a woman’s excessive blood loss after performing a Caesarean Section settled a medical malpractice case for $2.7 million less than one year after she died.

A 42-year year old man suffered multiple complications and was forced to endure several surgeries after a physician perforated his colon during a colonoscopy. The physician ignored the patient’s complaints about pain, and later declined to settle the case before trial. The jury awarded the patient $20 million in damages.

Surgical errors can occur during any kind of procedure, including plastic surgery.

Emergency room staff neglected to give oxygen to a 40-year old patient suffering from schizophrenia. The lack of oxygen led to brain damage.  The hospital settled the ensuing medical malpractice lawsuit for $3.3 million.

A patient might experience Reflex Sympathetic Dystrophy or Complex Regional Pain Syndrome (RSD/CRPS) as a result of a physician’s negligence during a surgical procedure, which then leads to pain that is disproportionate to the procedure. RSD/CRPS often causes significant quality-of-life issues for patients who are relegated to coping with severe pain in their daily activities.

These are representative examples only and are not guarantees of the damages that you might be able to recover if you suffer injuries as a result of a physician’s mistake.

Liability in negligence cases is generally a function of four elements: duty, breach of that duty, causation, and damage. In a medical negligence case, a caregiver’s duty is readily established by evidence of a physician-patient relationship. The skill and experience of a medical malpractice lawyer will go a long way toward establishing the other elements.

New York has established a 30-month deadline for filing a medical malpractice lawsuit under its statute of limitations laws, with certain exceptions relating to when an injury is discovered. New York also requires plaintiffs to file a “certificate of merit” within 90 days after starting a NY medical malpractice lawsuit. In that certificate, the attorney must verify that he or she has reviewed the case with an independent physician and that the injured party has a reasonable basis for filing the lawsuit.

Because medical malpractice claims can be complex and difficult to prove, our NYC malpractice lawyers utilize advanced tools including computer simulations and real life anatomical illustrations to explain complicated medical issues to a jury. We also work closely with qualified medical experts to assist with litigation, both in and out of court.

Our firm has helped medical malpractice accident victims in Manhattan, the Bronx, Brooklyn and throughout New York City and Long Island obtain financial compensation for their injuries. If you or someone you love has suffered a serious injury as the result of the negligence of a doctor, hospital, nurse or other medical professional or facility, call our offices today for a free, no-obligation consultation.

Get Your Free Case Consultation